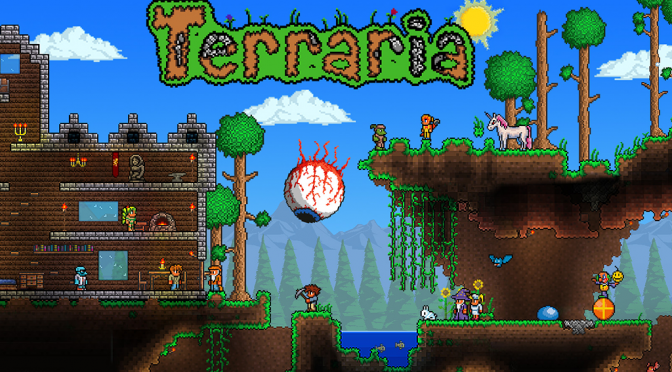 Hi, everybody. Skye here. I’ve become interested in hosting a dedicated server for a Terraria world, but first I’d like to get some idea of how many people would want to participate.

So since 1.3 came out I know a lot of people are playing—I’m an excited newcomer, myself. But this server would be a little unusual. See, I want to play on mediumcore. That’s the difficulty setting where you drop your equipment and inventory when you die. Let me explain! I think that it’s the most fun way to approach multiplayer because, without consequences for dying, people don’t need each other. All of the players can just do their own thing. What’s the point of that? We might as well all play single-player.

We’ll share resources to help recently killed players get back on their feet, and we’ll escort each other to retrieve items from where we’ve died. We won’t instantly forget about all of the items that came before each new tier of accessories and armor that we acquire; we’ll give it all a purpose by daring to lose the best gear if we screw up. We’ll build much more than just a single base at the center of the map; smaller outposts acting as respawn points and backup equipment caches strewn all across the world and connected by a minecart transit network will provide a safety net and a fast way to recover from mistakes. We’ll play a long, gradual game in which everyone approaches both exploration and world development differently than they would by themselves or on softcore difficulty, and, when we’re done, we’ll have a world that looks like it was inhabited by a civilization rather than a solitary wizard/hoarder in a singular fortress.

The world would almost always be available, hosted on my computer, so players would come and go when they like. I expect that the server would run for months before anyone “finishes” the game, with most players popping in now and then, contributing little by little to moving us collectively closer to that end point—or just building things!—rather than playing every single day. There’s no hurry, and this is a game that should be perfectly friendly to new players who don’t even know much more about how to progress than “mine ore and craft tools.”

The server details wouldn’t be given out publicly; only those who directly let me know they want in would be invited and receive the info to connect. That way, there won’t be any griefers, and we’d all be on the same page regarding how this differs from a typical Terraria experience. That’s especially important because players would each be trusted to bring in fresh, mediumcore characters, something that can’t be controlled server-side. For now, I’d just like to make sure that there are other people who want to do this with me!

What do you think? Does this sound like something you might want to be a part of? Please comment here, and I’ll follow up individually using the email address attached to your comment when I have a launch date in mind to give you the details. (I’ll also let you know if this whole thing just falls through.)

One thought on “Gauging Interest in a Terraria Server”